How to Turn Salt Water into Drinking Water | Desalination

Someday when the globe runs out of freshwater, you might want to know how to remove salt from saline water.

Get to Know What Is Salt Water

Salt water is water that contains significant amounts of dissolved salt, and we usually express its salt saturation in “parts per thousand” or ppt. For example, seawater has a salt concentration of about 35 ppt, meaning there are about 35 grams of salt per one liter (or kilogram) of seawater. 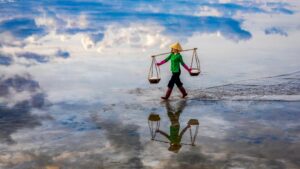 Edible water must keep the saline concentration lower than 0.05 ppt. The less saline substances, the better the quality of drinking water. The optimum value of ppt for drinking water is zero. For agriculture irrigation, the salt solution is limited at lower than 2 ppt, because increasing salt can salinize the soil and result in agricultural losses. Not also plants, but humans cannot afford the price of drinking highly saline water. Natural seawater, for example, can make us thirstier and thirstier, ending up with deadly dehydration. The high-concentration solution of salt in it cannot drench our thirst, on the contrary, it takes the water in our body away. In some severe cases, it can cause renal failure.

The heart of this article is to introduce how to turn salt water into drinking water. But before continuing, we feel obliged to let you know something important first—fresh water supply is now at the risk of failing to meet the demand.

Only 3% of the water on our blue planet is freshwater, of which, merely 1.2% can be used as drinking water, while the rest is locked up in glaciers, ice caps, and permafrost or buried deep in the ground. As seawater accounts for 97% of the Earth’s water resource and if we can find a way to fully make use of it, it would be the key to address the world’s looming water crisis.

According to the World Health Organization (WHO), there is approximately one billion population all around the world living in a situation of water scarcity all year round, and by 2025, almost half of the global population will go without adequate freshwater.

Other factors also drive us to seek freshwater resources. For example, the industrial pollution near rivers and waters is threatening the safety of existing drinking water. Global warming is raising sea levels, causing more and more salt water to merge into freshwater’s eco-system and that the increasing salinity in water will make freshwater no longer edible.

Most water desalination plants use reverse osmosis as their primary desalination technology. The technology works by forcing saline water through a semipermeable membrane, a filter material that can block up salt molecules and only let water molecules through. IDE Technologies, the brown jewel of Israel, for example, probably has the best reverse osmosis technology in the world. The corporation owns three large-scale desalination plants, producing nearly 1.5 million cubic meters of fresh water, approximately equivalent to half of the country’s freshwater supply. 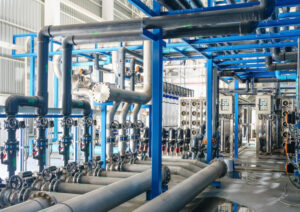 However, desalination technologies and equipment are expensive, and they can be only affordable by large water plants. 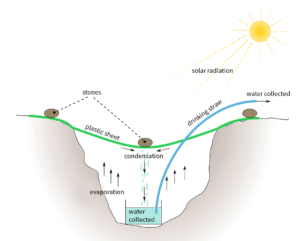 The solar still method relies on heat from the sun to run a distillation process which can form dew on surfaces like plastic sheets. When in need, individuals can conduct this method easily.

Water distillation requires containers and setting a fire to boil water. This method is also perfect for individual use.

Since you have learned how to make salt-free water, we are going to tell you how to convert freshwater into drinking water at your home. If you are living in an area abundant in freshwater, you are much luckier than one billion people on this Earth. But still, there are all sorts of elements affecting the quality of freshwater, such as the most common ones — mineral substances, chemicals from industrial activities near run-offs, pesticides lingered on plants and flushed into run-offs by rains, and more.