Home > Clean Water > What Does Summer Do to Your Drinking Water?

What Does Summer Do to Your Drinking Water?

When we refer to summer, we would think of the sun and heat. But how would these climatic features impact drinking water? Few articles give the answer. Nevertheless, we believe it is worth further research. We will show you the hidden link between hot summer and drinking water in this article. Keep reading!

To prevent bio-contaminants from growing, it’s better not to leave an opened bottled water out for a long time and remember to change the water in your pitcher every day.

Algae is a big threat to drinking water. In summer, with the temperature becoming higher and the sunlight growing stronger, waters get warmed and a conducive environment is created for algae to bloom. Compared with the shady sections, the sunny sections of rivers are found with more algae. There is also an existing example proving a successful invasion of algae to human’s drinking water systems. In the summer of 2014, the residents in Toledo, Ohio, were told not to drink, cook, or bathe with the water from their faucets, because toxic blue-green algae were having an explosive development in the drinking water system. Although the nutrient pollution from farming activities is the main reason leading to the algae bloom, the role of climate change is not to overlook. Summer is always algae’s best times. 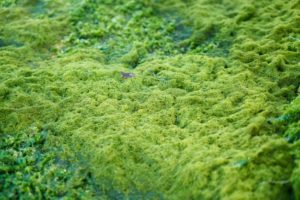 The high concentration of algae can produce cyanotoxins, which can cause terrible health issues. The impacts on humans include skin, eye, and throat irritation, vomiting, organ, and neurological damage, as well as respiratory problems. We may be confronted with the toxic algae from swimming, playing in the water, or swallowing water contaminated by it. Indirectly, we can also intake it by eating fish or shellfish which contains the toxins. Pets are said to be more vulnerable to the toxic algae. Reports prove that the death of some dogs is a result of them licking contaminated water or their fur stained with toxic algae.

While some algae are nontoxic, some can release unpleasant taste and odors, posing a big challenge to our nose. Once it appears in water supply plants, the drinking water treatment process can be beset with difficulties, and new toxins may be brought about when algae react with treatment chemicals. The cost of removing cyanotoxins is expensive and typically the cost will be passed on to water customers.

Bottled Water Exposed to The Sun May Change in Quality

Summer’s sunlight is intensive in most areas, causing heat and temperature going up. In this season, many water bottles are found left in the vacant car and soaked in the strong sunlight for hours. This has raised questions about whether it is safe to drink this bottled water again. Some studies said that the ultraviolet rays can kill some harmful bacteria, but it could also accelerate other kinds of bacteria’s growth, which tend to be more active at a higher temperature.

Some concerns focus on the bottle. The plastic container can leach bisphenol A, or BPA, a chemical known as an environmental estrogen, into the water when heated, according to numerous studies such as the “Food Additives and Contaminants” reported by Health Canada. BPA is usually used to harden plastic bottles, but since its potential threat to human brains and reproductive organ development has been revealed, most manufacturers have removed bottles made from this chemical from the marketplace. However, polycarbonate water bottles still contain this ingredient. The high temperatures may enhance the chemical’s speed in leaching into water.

If you want to use clear water bottles without BPA, you may need to keep an eye on the bottom of bottles. If they are marked with the recycle codes No.3 or No.7, the bottles may contain the chemical substance. On the other hand, keep water bottles at a cool place such as the freezer, so to prevent the release of BPA.

Summer’s high temperature and sunlight can affect a wide variety of water sources from municipal water supplying systems to rivers or wells. We cannot change how summer affects our environment; however, we can control the water quality with a reliable household water filtration system, giving drinking water a second thorough “cleaning”. Boasting high-end filtration technologies and competitive prices, Clatterans stands out among numerous brands. Certified by NSF & IAPMO, our water filters meet the requirements of NSF/ANSI standards 42, and are powerful in filtering out contaminants including algae, bacteria, as well as other unwanted toxins. To find a perfect-fitting filter for your refrigerator, please visit our website Clatterans.com for more information.